Recently i was contacted by a non profit organization based out of Wrocław, asking me if i would be interested in conducting classes for children.

The classes would have a character of informing kids about different cultures around the world, and educating them about different nationalities and how their daily life would look like. What are the foods they eat, how would they dress everyday and what kind of music they listen to.. etc etc. I was curious to learn more about how children understand and comprehend things in Poland, and how they learn at school etc etc, so without any hesitation i took the plunge.

The project which is called Mały Świat has volunteers from around the globe, and is financed by the regional representative of the European Union in Wrocław. It has volunteers from Macedonia, Cuba, India, Uzbekistan, China, New Zealand, Spain etc.. The kids which we had to give classes to, were from the age range of 8-11(ie. 3/rd, 4th grade). Each educator would be given a guide and we would work out the plan together on how to make the class as interesting as possible for the kids. We were also provided with classes on child psychology by a school teacher who has years of experience in this field. That made things a tad bit easier for us.

The guide i was assigned to was from Macedonia. She is a psychology graduate and has lot of experience with children and loved working with them. It helped me become more open and learn how to communicate with kids.

What did we do at the workshop? 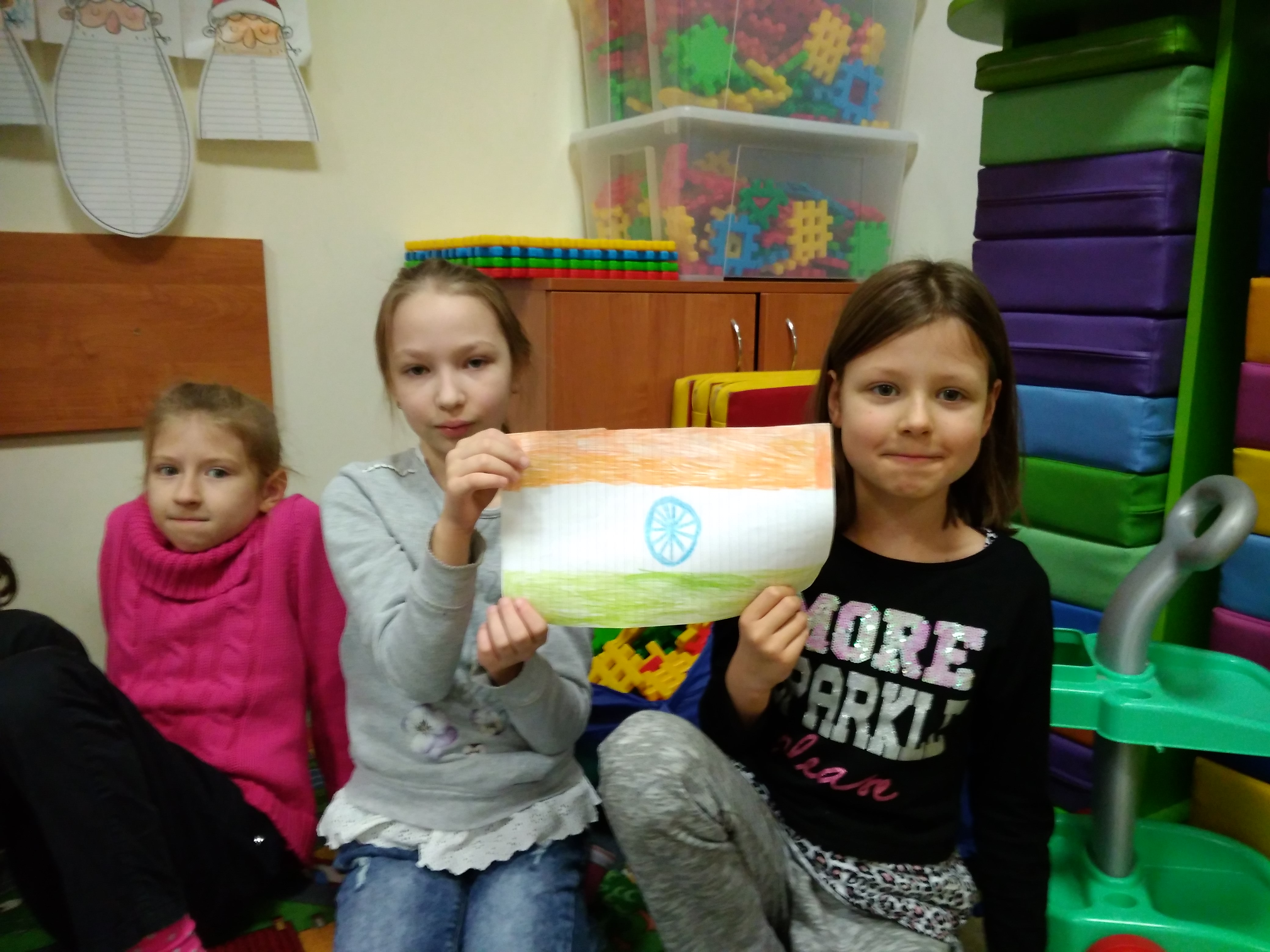 During each workshop there would be 5 classes ranging 45 minutes each. We would introduce ourselves and explain the kids the rules of the workshop. They would have to raise their hands to ask a question, or that they were not allowed to make noise and disturb while the educators are speaking. 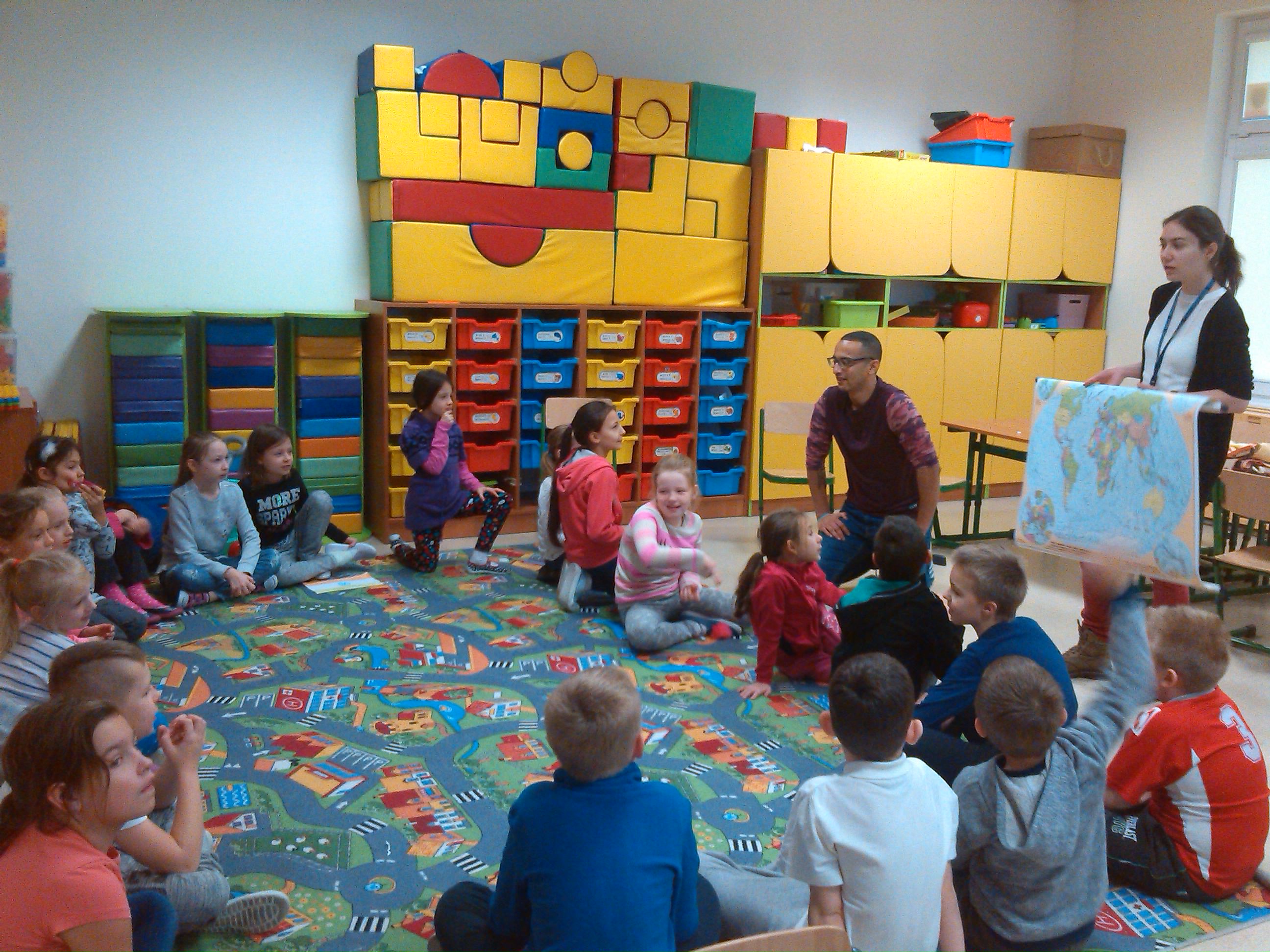 We started off by showing them a map of India and the kids would point our where India was located in the world map. Using the power point slides we showed the the Indian flag and explained them the meaning of the colours on the flag. Then we asked them about animals which they thought might be living in India. Children are always very caring towards animals and it was a perfect question to get their attention. As usual they mentioned elephant, tiger, lion etc. We even made cues and animals noises to make things a bit easier for them.

When we showed them the picture of the Indian cow dressed and decorated in different colours, they immediately mentioned ‘Święta krowa’ :). We explained why exactly the cow is sacred to us and they liked it.

After that we showed them how Indian women and men dress in their day to day life. We showed pictures of Indian women dressed in sarees, and even invited some girls to dress them up in saree. Since i didn’t have saree in poland, we used quilt instead. It did the job. 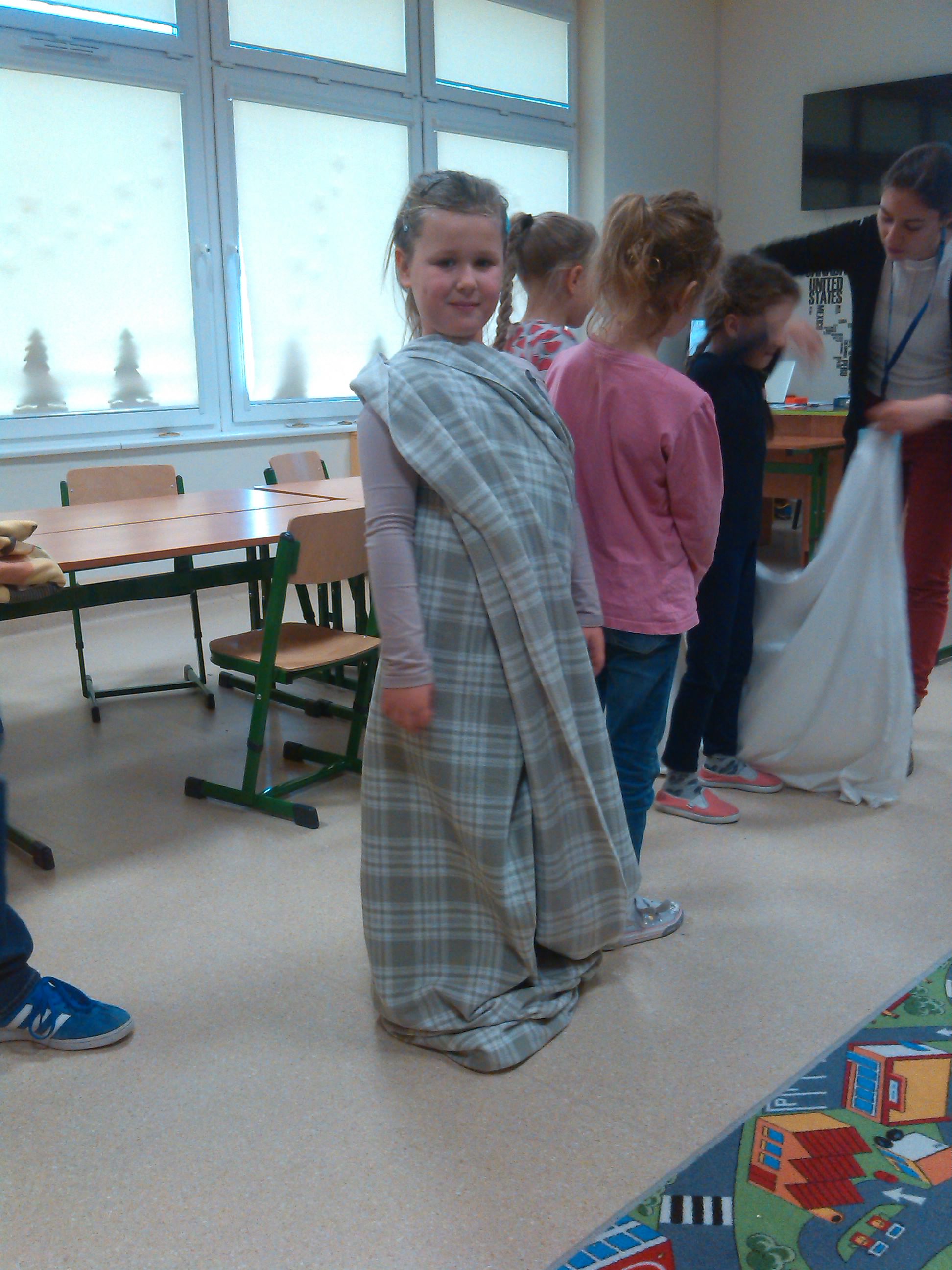 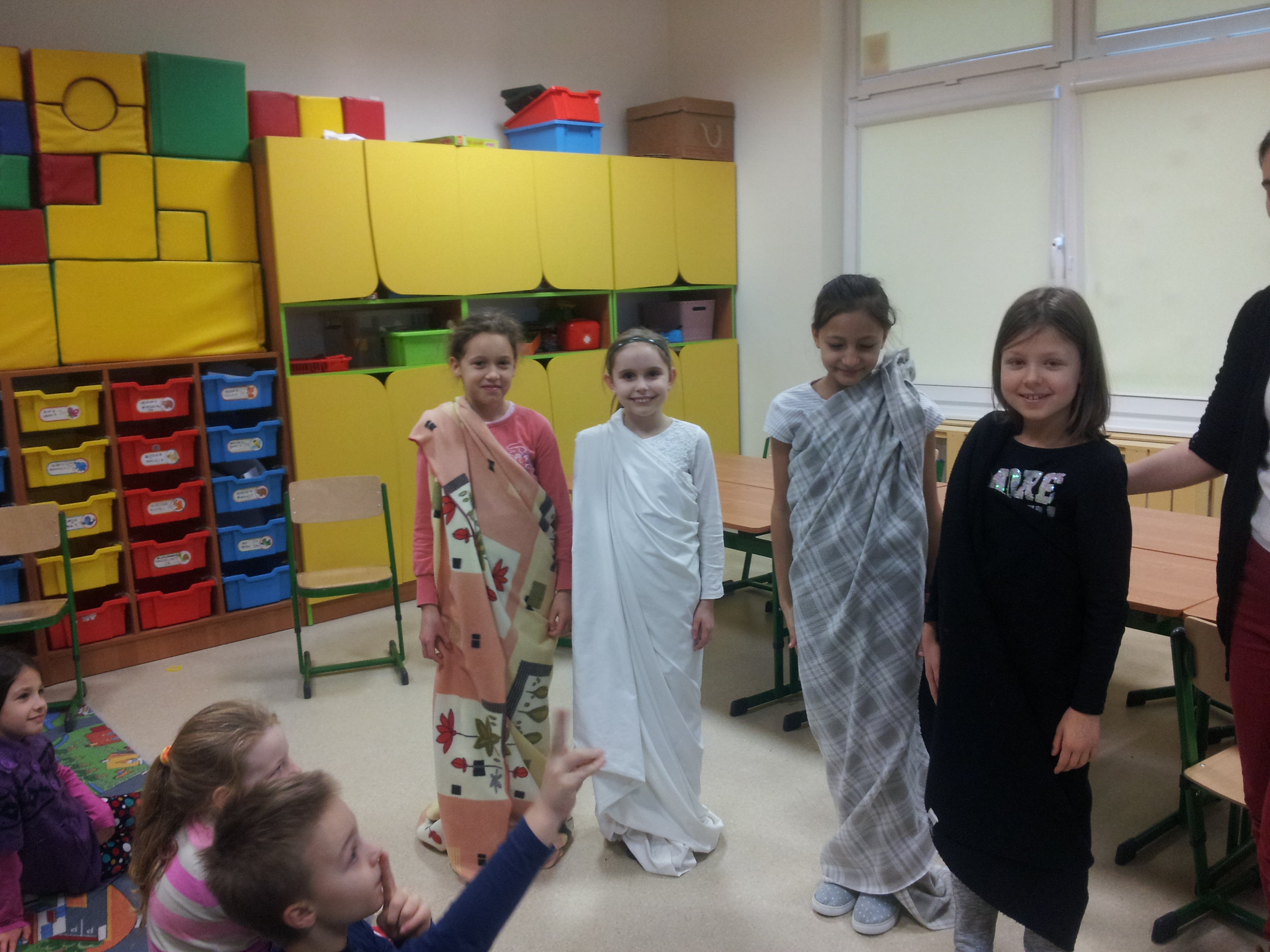 Boys were not excluded either. We made them dress up in ‘mundu’ which is a white piece of cloth which You tie around Your waist. (It is the traditional dress which Indian men wear in the southern part of India.) Here also the quilt came to our rescue. Girls had a lot of laugh when boys dressed up in make shift Mundu 🙂 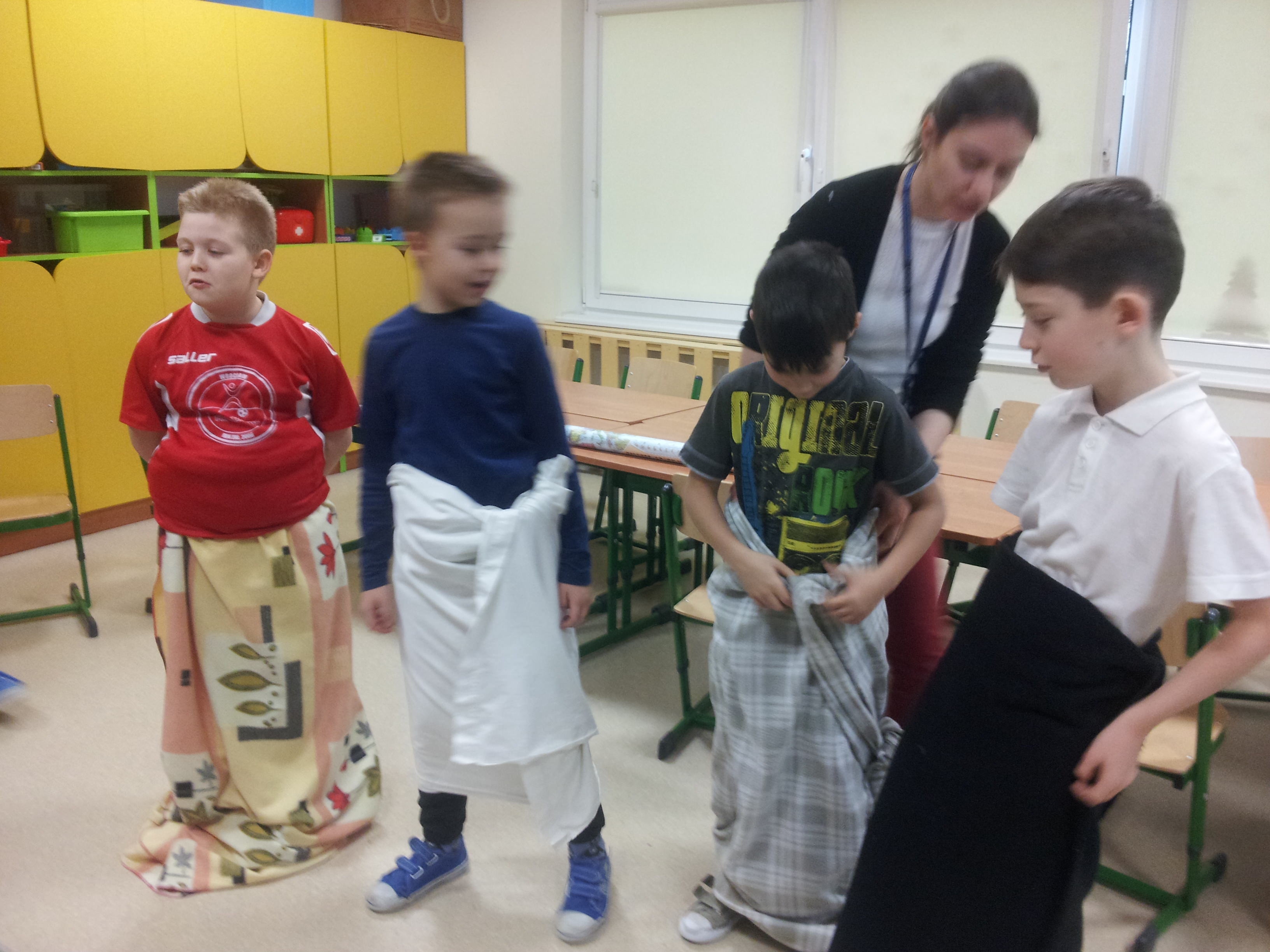 After that we showed them some famous Indian dishes and even brought some spices to the class, so that children could smell those spices. They loved spices. 🙂 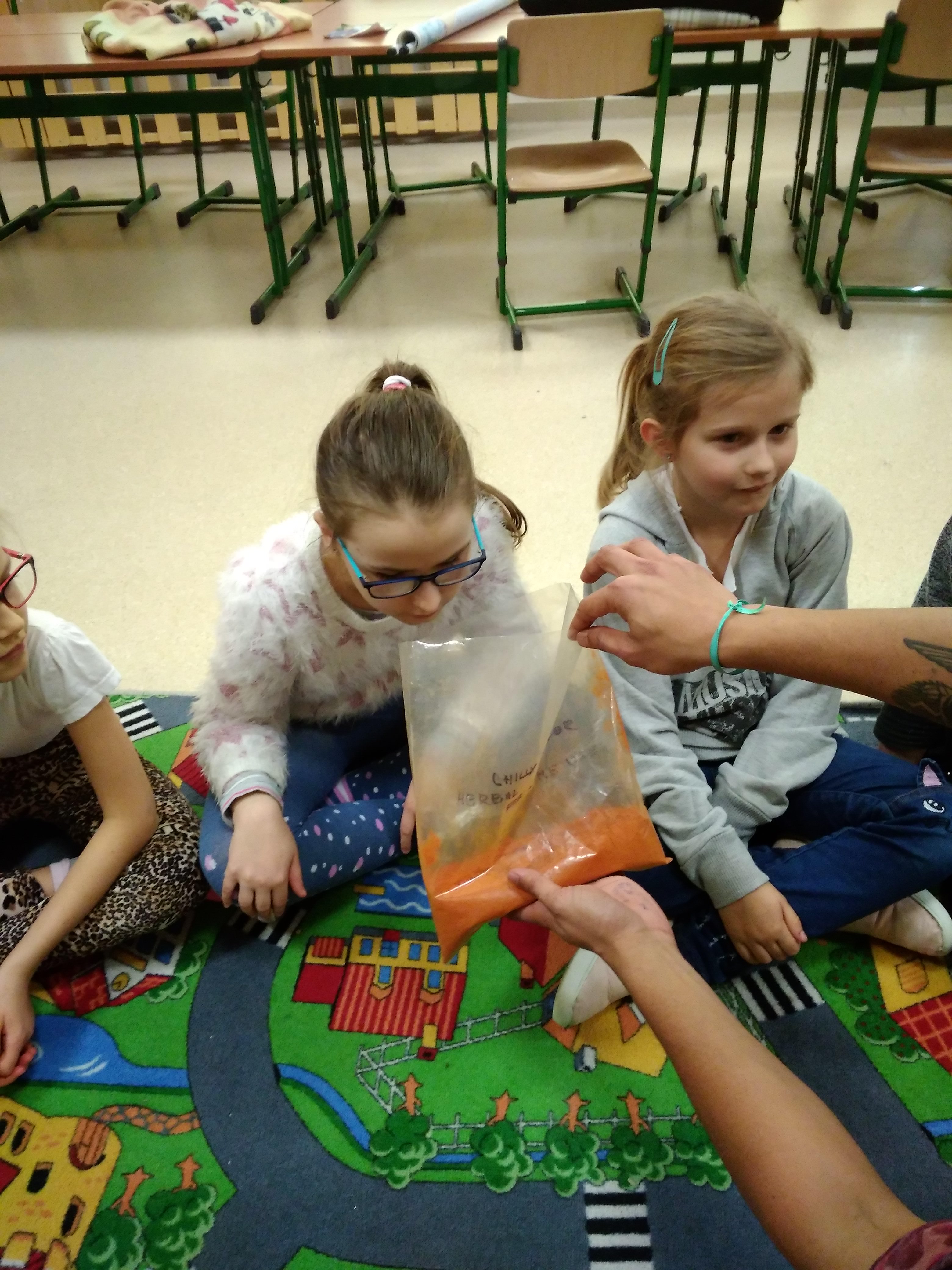 It was then time to dance. We danced to punjabi Bhangra music. Using a video clip from a game, we followed the steps from the video and we had a lot of fun. 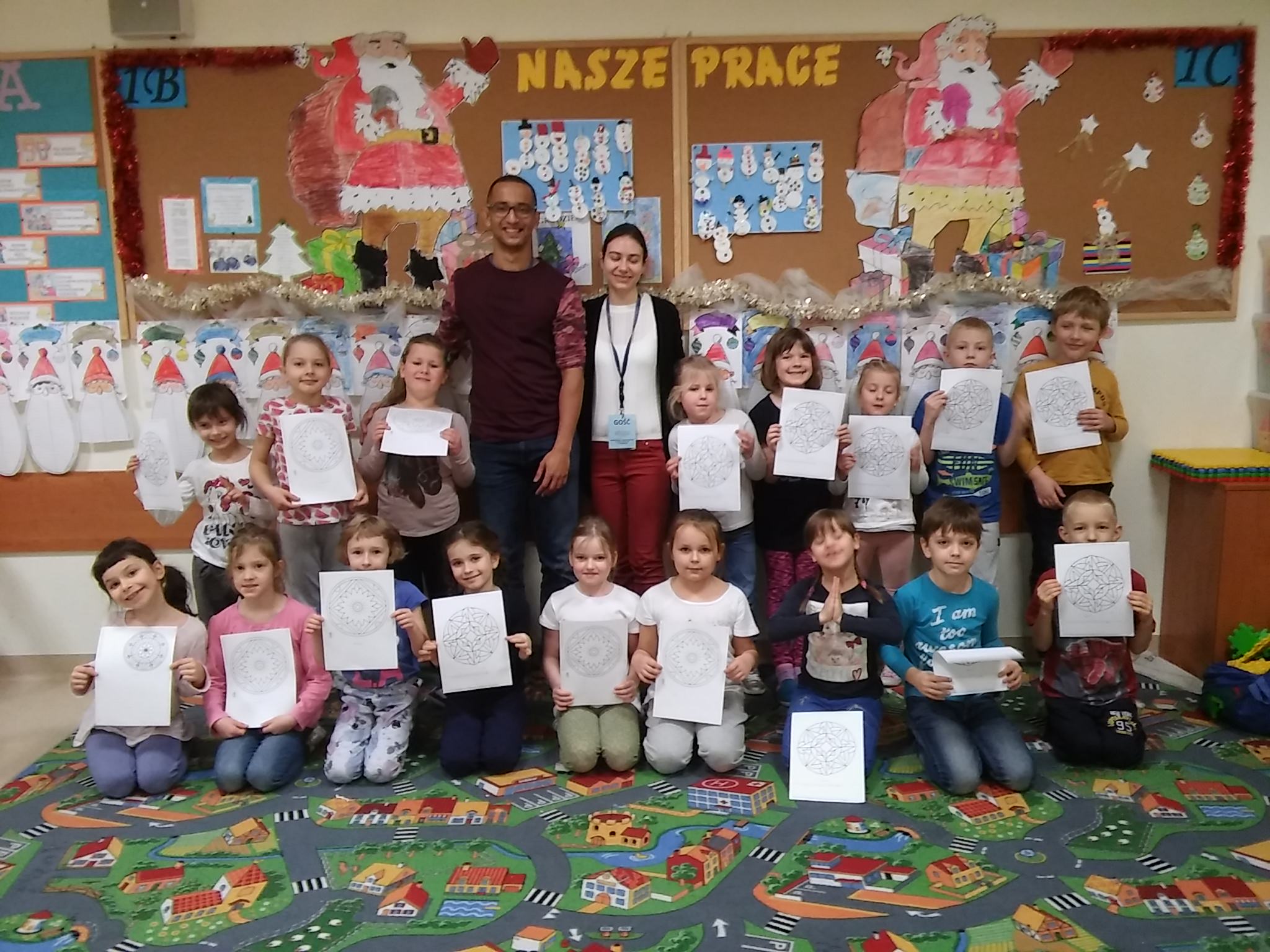 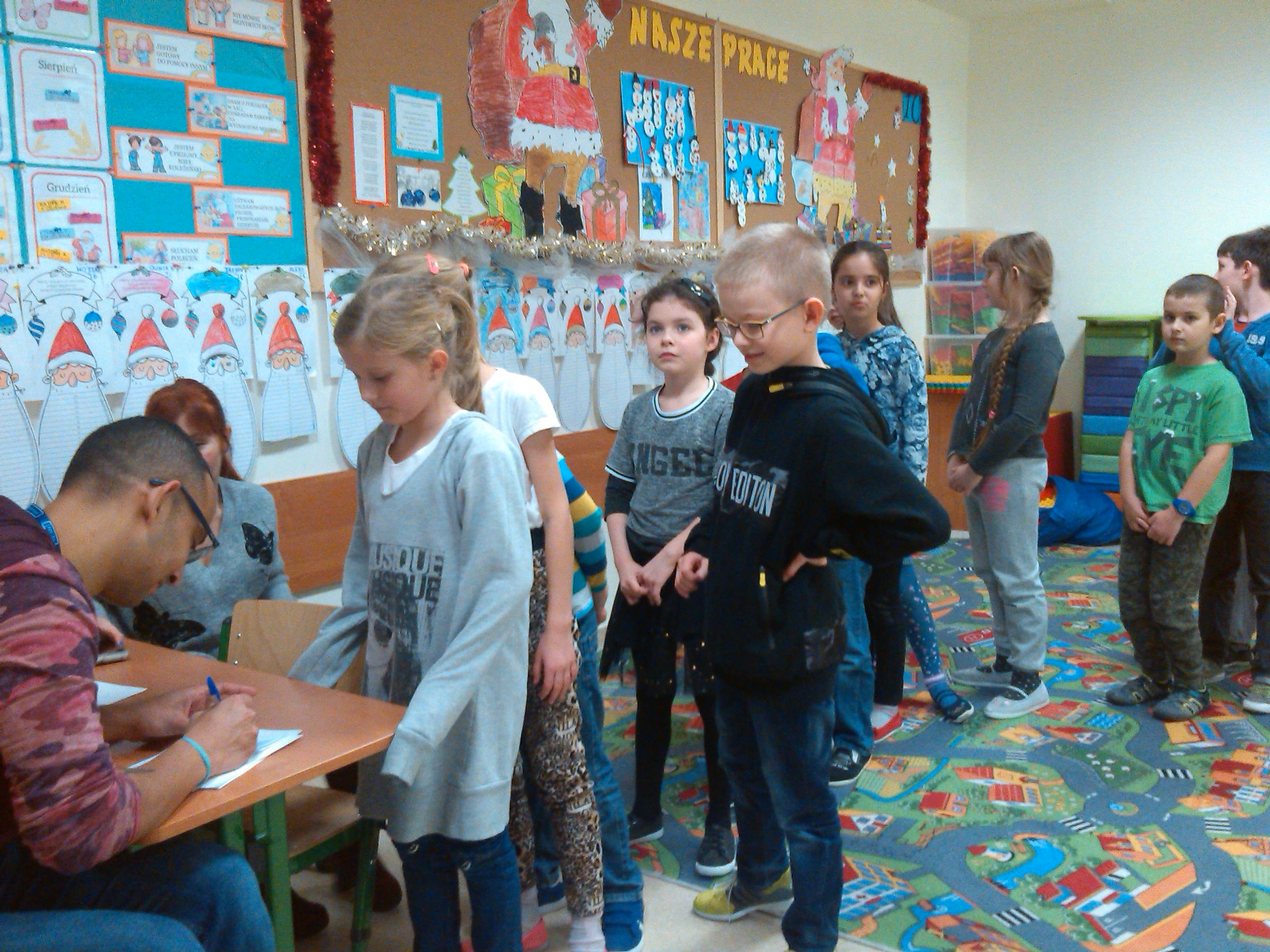 By this time the allocated time for each class would be over. As a present we decided to give kids Mandala patterns to colour. Before leaving i wrote each kid’s name on the sheet of paper in my language Malayalam, so that they would have something to remember in the future. They were happy to have their name written in a foreign language (which by the way looked like butterflies). I have to accept writing krzysztof and Zosia in my language was a tough challenge, but i somehow managed to write them their names.

The first workshop with kids was a learning experience. Now that we have finished the second day of workshops, i have to admit that working with children is a bliss. They listen to everything that You have say and are curious to learn more. There is no judgement. Kids don’t put up any barriers, and are accepting of who You are.

My fondest memory from these workshops?

Every time we would show pictures of animals in India, we would show two newly born monkeys. No matter how quiet or how noisy the group was, each time they saw the two cute monkeys, their heart would melt and would say ‘awwwww’. it was so liberating to see so much positivity from these kids.