While growing up in India, our parents gave a lot of focus on helping others and giving something back to the society.. My father and mother were members of a social club. Every once in two months, the members of the club would host a party at their respective homes. it was an opportunity for the members to bond with each other over food and discuss the future of the club

As soon as the the guests would arrive, men would immediately go to another room to drink whiskey or other alcohol. We youngsters would stay back and talk and play outside the house. We would joke with my brother, that these meetings were just an excuse for my dad and his friends to get drunk. 😀

But that was far from the truth. Besides eating and drinking, the club had actually a very good impact on us as youngsters.

Every year our parents would take us to a school nearby for deaf and dumb children. We would join them in celebrating India’s Independence day. The members of the club would give financial and material aid for the kids and their family. Me and my brother were regular attendees at this event for about 10+ years. I think it cultivated some form of social awareness in myself and my brother.

In Poland, as a student I was not in a position to give back anything as charity. But now that I have the possibility to spare some income, I would always make sure that I give something back to charity from my monthly pay check.
They say that 1.5 percent of Your salary is a good amount for charity. I think that is a decent amount. If we are in a position to save something from our salary. 1.5 percent shouldn’t be a big problem right?

I have never donated any massive amount of money to Charity. The disease called consumerism has caught me too, and I love to buy myself some clothes and shoes from time to time(zalando anyone?).
Still I would donate a measly part of my salary to Wosp. I can be rest assured that the money would go in to the right hands. Besides there is this ego boost, that You are not in fact a heartless person 😀

My parents are still giving back in every way possible. They are still members of the same club. Lately there was a flood in Kerala. All the club members were nice enough to collect funds and buy food and utensils for the people affected by the flood.

During this period there was a contest in our company called „VGL corporate social responsibility’. Offices from different cities in Poland participated in the contest by doing many selfless things like buying food for homeless pets, or by eliminating use of Plastic from daily life etc. etc..
My parent’s work motivated me to do something positive. I was able to collect some funds from my work and give it to my parents for helping people affected by floods in Kerala. We collected 100 euros from the Wrocław office. The utensils manufacturer added another 100 euro and we were able to buy a lot of cooking ware worth 200 euros for the people displaced by the floods in Kerala!
Thank You my mother Ms. Ushakumari for the idea. She actually travelled some hundred km far away from home to donate the gifts. Thank You for Your motivational work! 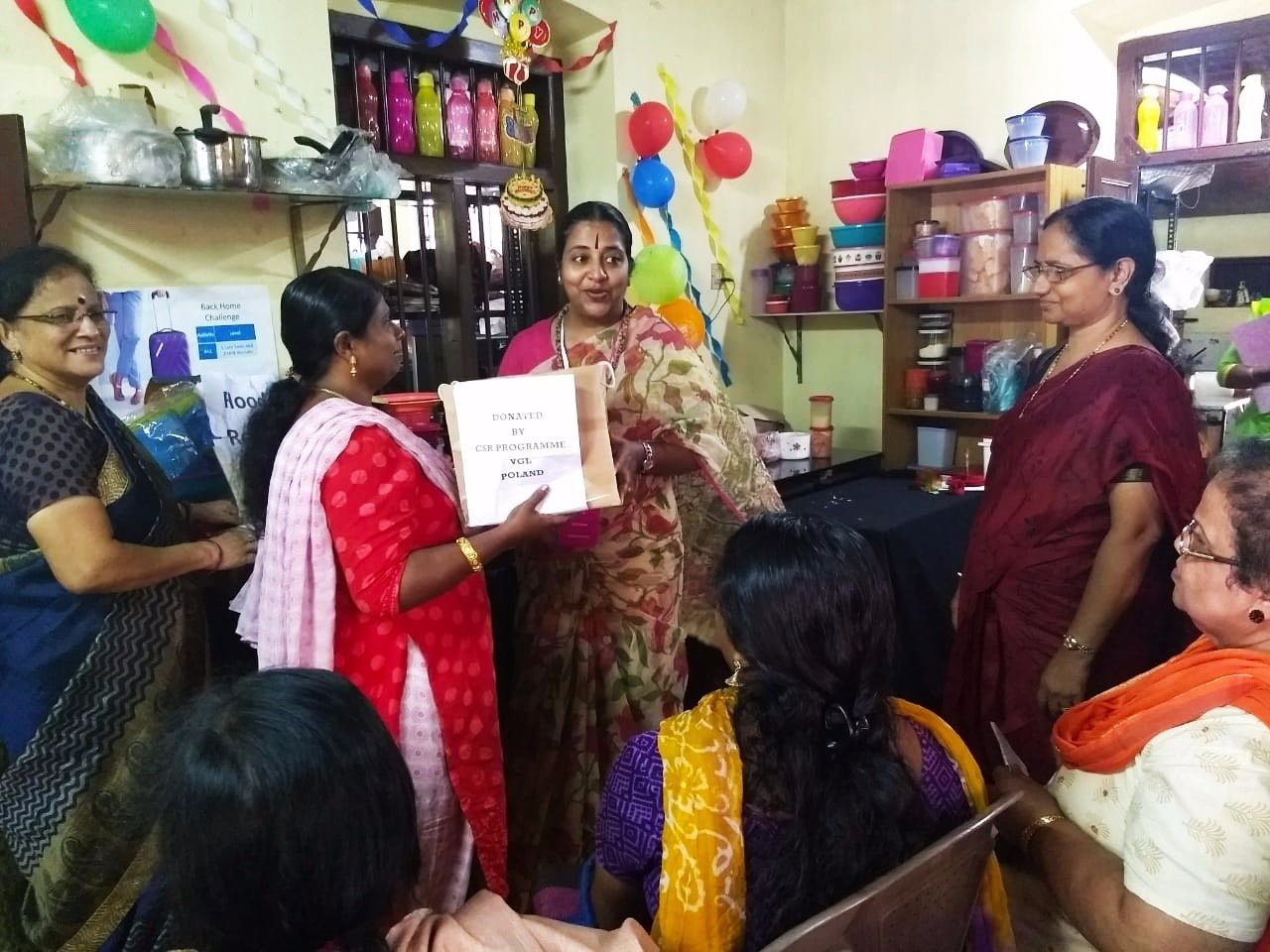