During the span of 27 years, my grandfather wrote 20 books Which included 5 on the correct usage of malayalam language, and 5 children’s books. Besides grammar and children’s books, my grandfather translated ancient sanskrit poems into malayalam (in an easily understandable way for readers) in his book Narayaneeyam(നാരായണീയം). One of his work titled ‘nalacharitham attakatha(നളചരിതം ആട്ടക്കഥ) even fetched him a state life time achievement award for his contributions to the literary world(something like nobel in literature, but in India) 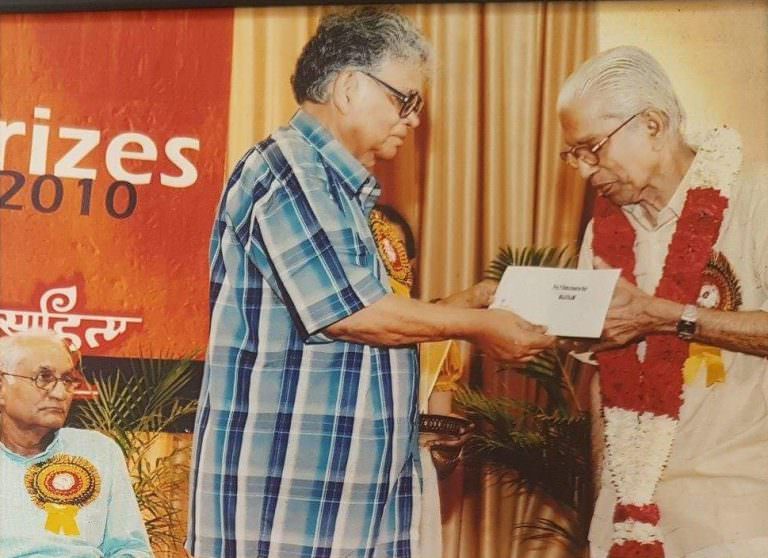 Every day my grandfather would have famous writers, and poeple from the television and press visiting him, to discuss the latest trends in malayalam language and literature. My grandmother’s job was to make tea for all these visitors. Sometimes she would joke ‘ Where does Your grandfather think that we have milk for making all this tea!?. I dont want to spend my whole life making tea for Guests. Help me!’’ 😀

What did my grandfather teach me, what values did he pass on to me?

Since my grandfather was a well accomplished writer, he would get free magazines from many publishers. We would have the whole living room filled with the latest magazines, and free copies of latest books published by writers around Kerala.. Thanks to his position, I had access to free books and magazines from major publishers. While my grandfather would write in one corner of the house, i would sit across him and read poems, articles about world politics, and about films from around the world like France, UK and the USA.
In the evening we would sit together and watch the evening film on the TV and drink tea. 🙂 Sometimes i would find small grammar mistakes in some of the articles and books written by him, and would run to him to show those mistakes. He would later go on to praise me among all the guests and family members ‘ Ah Chandu found a mistake today in one of my articles, Good job Chandu’.

Thanks to him, i developed a love for books and magazines from a very young age. I loved the feeling of touching and smelling freshly printed books and magazines. 🙂 He instilled the habit of reading in me which made curious about this world, and people. He made me wonder, ask questions and be curious about everything. We bonded together over malayalam grammar, and through discussions about politics in India, and over the world.

Smile Chandu
My grandfather possessed a huge library with 100’s of books that he had received over the years. We both love good humour and he knew how much i loved laughing. Whenever he saw that i had a bad day, he would then take me to the library and we would look for books with jokes in malayalam. Later i would read the jokes out loud, and we would laugh together. He loved it when i was smiling 🙂

In what way was i different from my grandfather.
My grandfather was utterly focused on his literary career. While my grandmother was focused on the household. he would spend his evenings writing, and proof reading articles which people would send him. He had a short temper(maybe because he was the only child), and would get angry at my mother and grandmother for any petite thing. Later they would complain to me ‘why does Your grandfather have to be so rude? i would comfort my mother and grandmother, and tell them to forget about it. I was the mediator at our home.

When my grandfather and other family members would have small arguments, i would remain like an ocean of peace. I wouldn’t get angry as quickly as my grandfather. While my mother and grandfather would have a heated argument, i would be sipping tea and reading the newspaper at the corner of the living room. Somehow his short temper didn’t have any effect on me. When he would scold everyone, i was the one who would go to comfort them. 'Our Grandfather is not getting angry on purpose.. let’s just ignore this and move on’.

I have a fond memory from my childhood, which i think You might like. When i was young, i stole something valuable from my aunt’s house (I know, i know. It was stupid. You know how You are prone to do silly stuff when You are Young). Everyone at my family was very disappointed in me. My aunt, and uncle would tell me that they wouldn’t want to see me anymore. Even my family members basically didn’t have time to talk with me or comfort me. It was one of the worst times of my life, and i had completely lost all self respect. I could see that my grandfather felt very bad seeing how others treated me.

Couple of years later he would go on to tell me how, his heart was broken hearing things about me from my uncle and aunt. He told me that he still loved me for who i am, and would not judge me based on my mistakes. He reminded me that he loved me no matter what mistakes i have made in life. Actually that is when i realised that i have someone in my life who loved me unconditionally. I loved my grandfather more than my mother, father or brother.

My grandfather had a heart stroke recently and his condition is getting worse and worse by day. I always wanted to tell him that i love my grandfather the most in this world(before it would be too late). I never told him this before(We dont have the tradition of saying ‘i love You’ and expressing our love for each other in our family. It is not an Indian thing, but in our family we didn’t practice it). So i called him over the telephone.

I knew that my grandfather cannot speak, but he could understand what i was saying. I told him how much everyone loved the post about my grandfather in the blog, and told him that he was my hero. He was saying something back, but i couldn’t understand it. I told him i have so much things to tell him, and asked him to stay strong and healthy, so i can come and visit him in 6 months. My mother told me that he was happy hearing from me 🙂