I bought a house

I bought a house

Finally after a lot of searching, i was able to buy my home in Poland.

In Poland, someone who has finished their studies, and is 25 years old and and not under the supervision of parents is considered as an adult.

Meanwhile in India, someone who has finished their studies is still not considered as an adult. I could be 30 years old, with a college degree, a stable job and not under the support of my parents and still wont be treated as an adult. So buying a house will definitely help me achieve the status of an ‘adult’. Therefore it was a big turning point in my life.

I was searching for a home with the help of a real estate agent and after seeing about 20 or so different homes i came upon one that i really liked. We checked for homes from the developers market as well as homes from the ‘used homes’ market. I decided to stick with the used homes market, since i don’t have to worry about buying furniture and other home appliances for the home. Besides i have to find workers who will do the kitchen and the bathroom and have to supervise their work. It all seemed like a hassle for me.

Working with a home broker was something that i was not a big fan of, because some how i didn’t trust them. They just want to sell You any house and just get their money. At the end of the day they don’t care what house You buy as long as they get their money. There are intact some good points of using a home broker. They will check whether the home is under collateral or whether they are multiple owners of the house(than the one who is selling their house), or whether the owner owes the city money in the form of taxes etc. A friend from my work bought a house using an agent, and she suggested i try them. So i did……

In India when we buy a house, new car or do anything that has important consequences, someone like our father or uncle or someone elder will accompany us to oversee the whole procedure. So my father asked me to invite my friend along with me on the day of signing the notary agreement. Since i am not polish and might have problems understanding many clauses in the agreement, i thought it was a good idea. I proposed it to the agent and at first she was skeptical. I decided to explain the fact that my friend is like a brother to me and he is just overseeing the procedure and will not hinder her work or cause any trouble. So she agreed.

I came to know that in Poland people don’t do that. If You are buying Your own house, You don’t need to invite Your parents or brothers when You sign the agreement. So i told my friend that he would not have to come during the signing and i would manage myself. Besides i didn’t want to give off any unwanted vibes to other people. 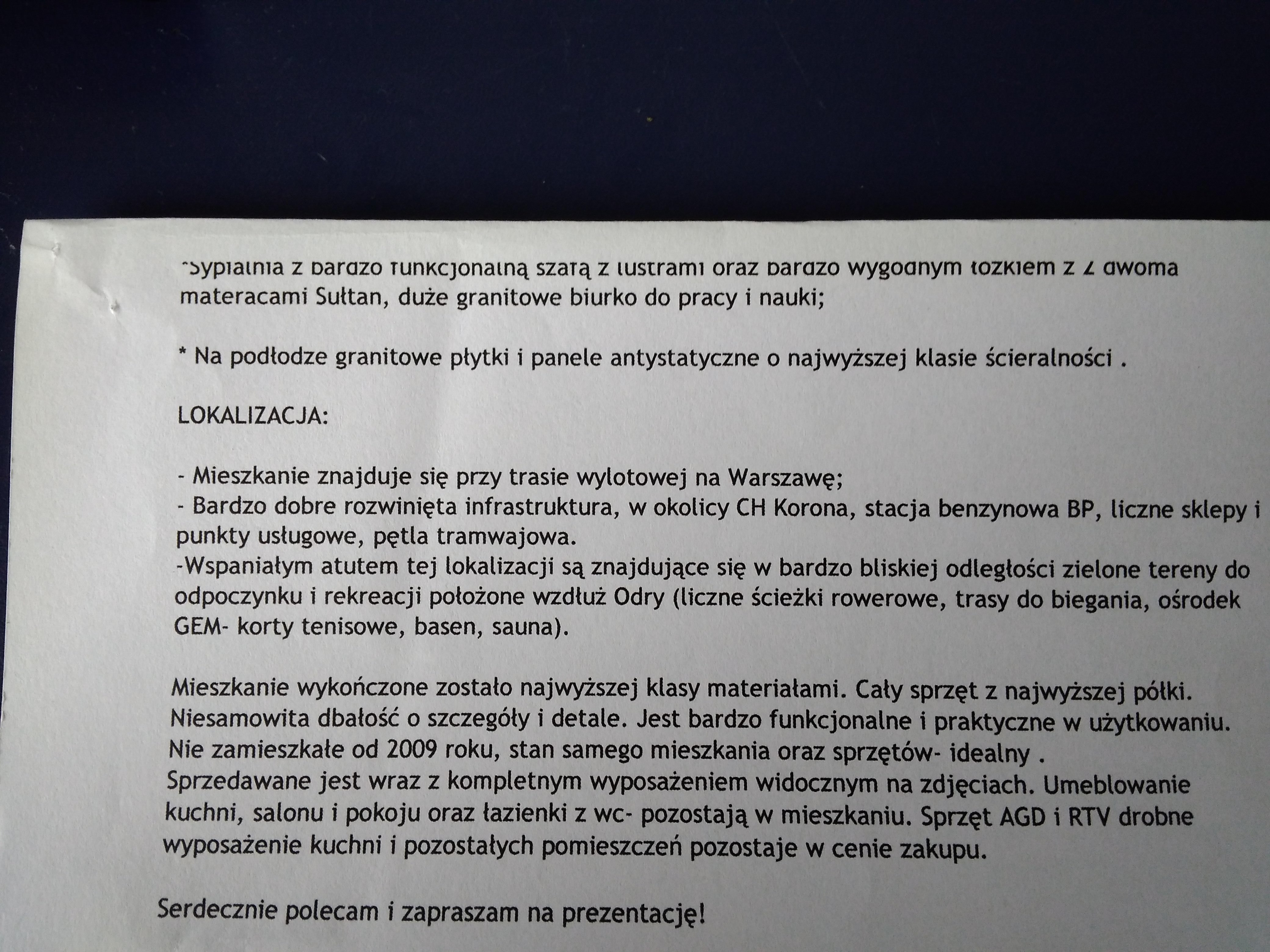 The advertisement from the home broker. The second last sentence in Polish says all the home appliances will stay in the house.

On the day of signing the agreement, my friend decided to come and i asked him if he would really want to join us because it is something unorthodox in Poland. He reassured me that he wont fiddle with the process and he will just read the agreement for me. So i agreed. The notary read the agreement and we all checked the agreement for any errors in our names and other personal data. Once we checked, we decided to proceed to signing the agreement. But then the seller decided to change his mind. He asked me if he can take the TV and the hifi system from the home because they are of sentimental value to him. During the day of presentation he didn’t mention anything of that sorts, and intact he was boasting about how good all the appliances where. The reason i decided to buy this house was due to the value of the home appliances and other utilities which would stay in the home (these items were mentioned  in the pre agreement). So i didn’t agree with his proposal.

There was a 20 minute discussion where my agent and the seller tried to convince me to give him the tv and the hifi back. I told them that an agreement is an agreement and i don’t have to give them back anything. My friend came to my support and told them that if they don’t agree, then we can terminate the agreement. The seller would have to give me back the ‘zadatek’ back and we can move on(zadatek is deposit in Polish which You pay during the signing of the agreement prior to the notary agreement). They even threatened my friend and told him that he was not welcome there. He was termed as ‘un-polite’ and 'rude’. My friend was just protecting my interest. He was intact silent during the whole procedure, but couldn’t allow them to cheat me. In fact the only two people who were in favour of me was the notary and my friend. The agent and the seller wanted to just earn more money. The agent should have protected my interest, since I am paying her 2 percentage of the whole value of the house. But she didn’t. This just reaffirmed my stereotypes about agents.

Finally they decided to sign the agreement and the tv and the hifi system will stay in the house. The moral of the story is that even if You are polish or Indian citizen You can come into the face of trouble if You are buying a house or doing any other thing of importance in Your life . It might seem unorthodox in Poland, but if it was not for my friend, i could have been forced to sign the agreement to their terms

So my foreign friends, ask a friend to help You in such matters in Poland.