Freedom in Poland- how we Indians see that freedom?

Marriage in India, is a topic which could be interesting for many Poles.

In India, parents search for the partner for both the bride and groom. Yes maybe it sounds ridiculous. It’s true. 99 percent of the marriages are arranged by the parents. When the bride reaches an age of 24, 25 parents start to look for a partner for her. In men’s case, it can be ages 27,28,30. When we are at this age, parents will open a profile in one of India’s many leading marriage websites and create a profile. In the past, parents used to place advertisements on the 'marriage’ section in the newspapers.

The average profile would look like the following. There would be information about name, age and Your profession. Professions like doctors or engineers are highly admired. If You are working abroad in the USA , UK or in the gulf states, you are in demand. A very important factor in selecting the candidate for both men and women is the caste. We have a system called caste system (which is mess which we created after the british left us). People are classified into 4 different castes, mainly Brahmins(priests, scholars, in the top positions of the society like bankers , engineers), Kshatriyas(rulers, administrators, warriors) ,Vaishyas (artisans, merchants, tradesmen and farmers) and Shudras(labourers) . People mostly select castes which are similar or slightly higher than their’s . The castes which are in the very bottom like shudras are only allowed to marry with castes similar to their own. For a person who is shudra, it is un imaginable to marry someone from the higher/middle pool of castes. So most people will search for people from the similar castes in the portal. Parents will add a profile picture and some basic information, like required castes of the bride/groom, preferred age, profession and also prefer zodiac sign. Once the profile is completed, it is time to search for Your partner, and then start sending messages.

It works like the dating profiles in Poland, but the difference is that it is meant for marriage only. Once the parents receive proposals(messages), they give the proposals to the respective partners and ask them to select one. Here the partners have some voice, but parents also have to like that person. So opinion of parents also have a huge effect. Once they all come into a mutual conclusion, then the parents of the groom will arrange a meeting with the parents of the bride. Once the candidate has been selected,  the groom goes into the house of the bride. Parents from both the sides will sit around each other. The bride will come with tea and some sweets and present herself for a couple of minutes . Then she would leave, and later both the bride & groom would have a chance to talk with each other for like 5 to 10 minutes. One of the elders would ask them to go to a separate room to chat for a while. They would then exchange some words and get to know each other. They will keep in contact via whatsapp or Facebook and get to know each other. Couple of years back when there was no telephone/computer, there were no such medium to keep in touch. So it was way harder. After that the parents compare zodiac signs with a  priest, and if everything mathces they go for date of engagement . 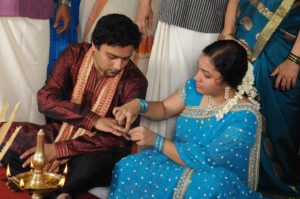 My brother and his wife.

My brother got married this way, and he is living happily with his wife. They seem to be completely fine. So its crazy in a way,but it works. That is the magic. In India it is the way it works.

In India, it is the only way to get married. I asked one of my indian girl friends once, why is it that Indians use arranged marriage, and why cant we marry by falling in love and finding our own partners? She said to me that, not all indians have that luxury. It is fate, it is the way society is built. There is no avenue for finding a partner using a dating website, or by going to dates or movies together. Our culture is different, and people seem to accept it. They are happy to get married by this system, and they somehow fall in love and live naturally.

About 80-95 percent of my school, college mates who married have used the arranged marriage system. There are about 5 percent people who actually met their partners and fell in love and kept it a secret . Until one day they both got financially secure and proposed the idea to their parents. In many situations parents will be open to talk with the other parties, and it turns out that the pair gets married. So there is hope. At least the demographics are changing. In some years things might get more convincing.