My appearance on the polish tv show ‘Pytanie na śniadanie’ in TVP2.

State of sadness and fight against depression

On the 28t of June I had the luck of appearing in the polish breakfast show ‘ Pytanie na Śniadanie’.

Along with two other Indians, i had the chance to speak with the famous TV 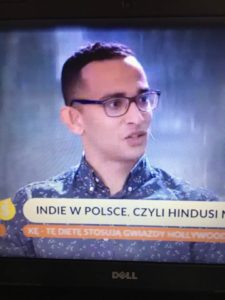 personalities Kammel and Marzena of TVP2(i regret the fact that i didn’t take a selfie with them, i remembered it once my friend asked me about it after the show, ahhhh). The chance to appear in this programme happened, once my friend published my blog in her facebook feed. The representatives at TVP2 called my friend directly(Being a renowned doctor, my friend had lot of famous people following her facebook) and asked about me. They wanted to know some basic details about who I am, do i speak polish etc. My friend being so nice she is, said that I am a very open person, and i know very good polish etc, etc, which made the interview possible. To this day i cant believe that i was in a tv show watched by around half a million polish people.

I was positively surprised by the invitation to PNŚ. It was just after the 4th post in my blog, that the people at TVP 2 called my friend about the possibility of me appearing in the show. So it was pretty fast. It is nice, that polish people find it very interesting to hear what i have to say about their culture, that my opinion is of so much interest to You!. The fact that Polish society accepts some one from another culture into their own, is very heart warming. After starting to write this blog, i have felt that many polish friends have started to understand me better, and we have become closer(even though we have known each other for 5 years +). So thank You.

The show is filmed at the TVP2 HQ in Warsaw. On the day of the interview i was there around 07.30 in the office. A lady did make up on me and i had to wait for the interview for 45 minutes. There were stage technicians and people moving everywhere, doing their own thing. I was pretty stressed about appearing on the show. My heart was pumping fast, and i was wondering what if i make some mistakes on live tv? It can never be erased. After sitting there, thinking on how it will go around, i met the first Indian, Tapi, who was to appear in the interview along with me. Talking with my fellow country man for a few minutes made me relaxed :). He was from the north, so i had to talk with him in english. Tapi seemed like a laid back, chill dude, and soon i was very relaxed. After a while i also met the madam who was to appear alongside us in the interview. One coffee later, i was ready to go 🙂 I promised that i wont take a look at the monitor on the right side, so as to not get stressed.

A couple of days before the interview, I asked the TVP representative about any possible questions for the interview(she was happy to send them), so as to well prepare. I was pretty confident with the way i prepared. Soon as all of us were there, we were asked into another room for the interview. This is it. We were about to go live in a  couple of minutes. Marzena started the show with some intro, and it was time for the first questions. I was asked to sit in the middle(maybe this is because my Polish was intermediate level? i don’t know). The friend on my left, Tapi, definitely knew Polish much better than me(he is living in Warsaw for the last 20 years, and is already known by everyone in TVP2). It was the turn of the madam from India to answer the first questions, and after that it was my first turn. I tried to keep my poker face and answer the questions as calmly as possible. I had a tough time getting the words out of my mouth(i even said 'kurde’ on live tv, just to get the words out of my mouth).

After the first question, it became easy for me to talk 🙂 Soon after Tapi finished his answer, it was time for the next question. Now it was about what we liked about Poland. I had this part prepared well. I told them that ‘’everyone always mentions the common things they like about Poland, like the polish food ‘bigos’ or ‘pierogi’, but i would like to surprise You with my answer. I like the polish rock festival Woodstock’'(Woodstock is a controversial topic in Poland right now, since the organisers of Woodstock, Jerzy Owszak & team, have some ongoing feud with the polish national party PIS.) I just told in TVP2, that i like the festival Woodstock!, which the national party PIS is doing its best to stop from happening. After i said how great Woodstock is, both Kammel and Marzena where trying their best to change the topic. Kammel suddenly said, that we in India have more colours and that our festivals are better than Woodstock. They were both frantically searching for some way to ease the situation and get control back. I was like ‘what is going on here’? But did i stop there? NO! I went on further to say that, ‘no, no Woodstock is the best’ 🙂 To this day i cant believe how funny it is. I really had no intention to cause any furore or create wrongful attention in tv. It was my honest answer. I love Woodstock. I have seen so many artists live in Poland at Woodstock than i would have had the chance to see, had i have been living in India.( i would write more about this in another post). Soon after i said about Woodstock festival in TVP2, the camera operator showed his thumbs up (probably he was saying F*** yeah!! 🙂 ) and i was pretty surprised to see that. Suddenly i looked over him in my right, and i was caught off guard. To this day, when i say this to my friends, they all laugh. I had lot of polish people commenting on how well they liked the fact that, i mentioned about Woodstock in polish TV. In some way they are happy, that i voiced their opinion in public tv. I think they feel that i carried their voice and made it heard among thousands of others sitting and watching around Poland. All in all this was a very positive turn of events for me. During such a short time, i had the chance to appear in TV? Thats awesome. I hope to have more such amazing experiences. I am posting the link to the full interview below.