By this time the whole area will have around 1000people. 1000 people? I can already hear You asking ‘but who will pay for food and vodka for 1000 poeple?’ :). we dont consume alcohol during marriages in India. But wait, we have great vegetarian food 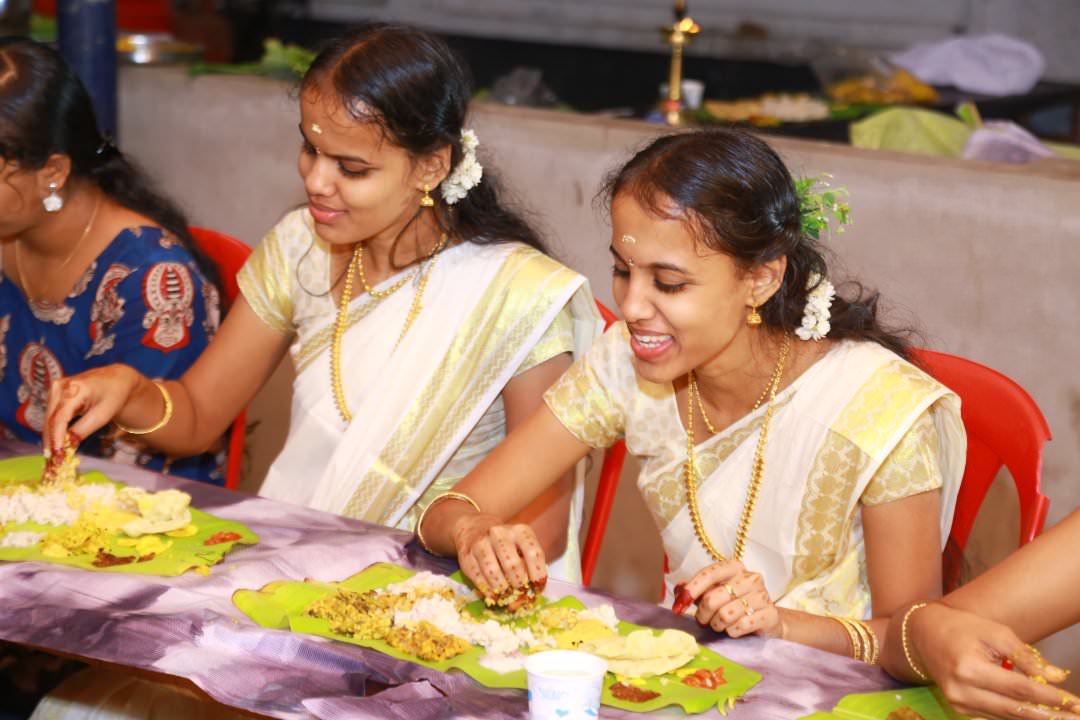 Once the bride and groom exchange rings and the marriage function comes to an end, people rushe to the food court. At this food court, there is space for atleast 300-400 people. Since there are a lot of people, food is served in batches. There will be assistants who will come and serve the food. Food is served in banana leafs, because we have a long tradition of using banana leaves in India for big functions. Eating in Banana leaves is also considered healthy for Your body than using plastic containers and plates. Bride and groom usually eat in the first batch, because they deserve it 🙂

First course is rice. Rice will be distributed by one or two persons through a huge tumble of cooked rice. Soon after the rice man, comes the person with the curry jars. He will put small amounts of curry on everyone’s banana leaf. He is accompanied by another assistant with a set of sauces and pickles.

The second course consists of desserts. They are desserts of different flavours,  but mainly two which are served in most marriages . One is made out of condensed milk, while the other is made out of zachary. Both are really tasty. Usually by this time the banana leaf would have to be empty because there will be no space for dessert . So people eat pretty fast. Who would want to miss out on tasty dessert?? 🙂

After the desserts are finsihed, the rice man comes again and asks people if they want more. Some will agree and eat more. The curry brigade follows him and pours curry for those who wants it. After this batch people slowly start and wash their hands and prepare to leave . Most of You would have noticed by now that we eat by hands in India :). If i am at a wedding i have to eat by hand too, and cant act european and eat with a fork. People will probably laugh at me for that. 😛

After the first set of people finish eating, then comes the second and the third, until everyone eats and is happy.

Soon after the guests leave, the important family members stay back. Now is the time to say good bye to each other. This is a emotional time for the bride and her family. Brides in India stay with the husband and his parents once they are married. Usually the mother and the bride will cry and hug each other because she is now going to live with a new family. There will be new people and new rules. She is now a wife and can only see her parents and immediate relatives like grandfather and grandmother only very often. After saying good byes, both families leave to their respective homes. 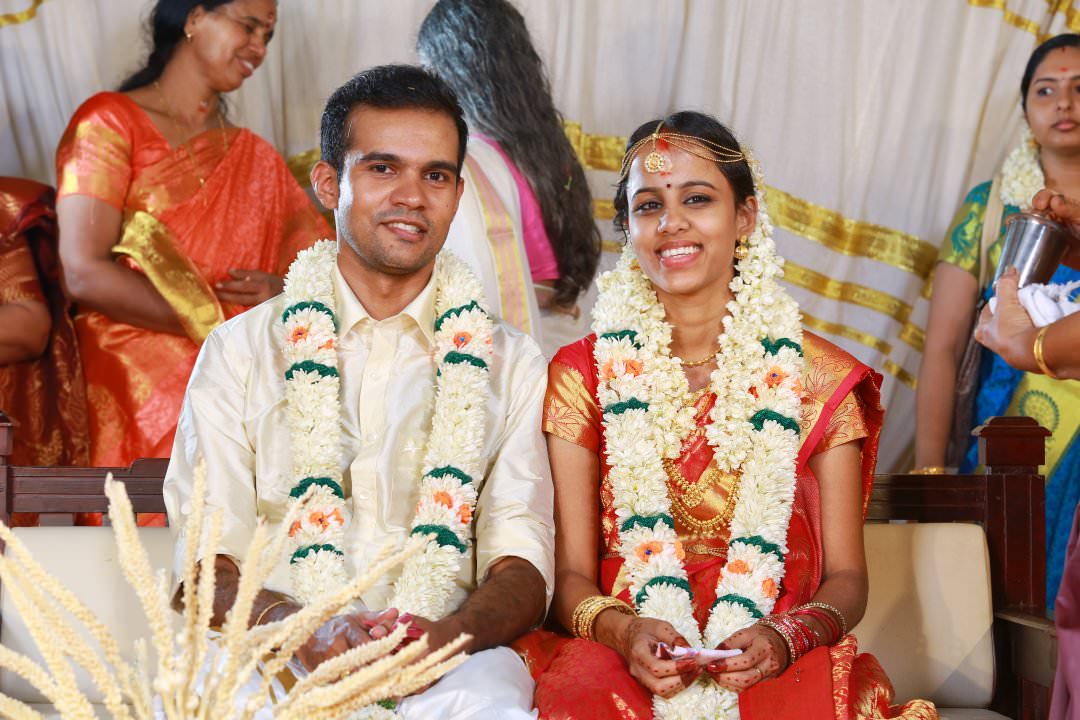 At my friend’s wedding… 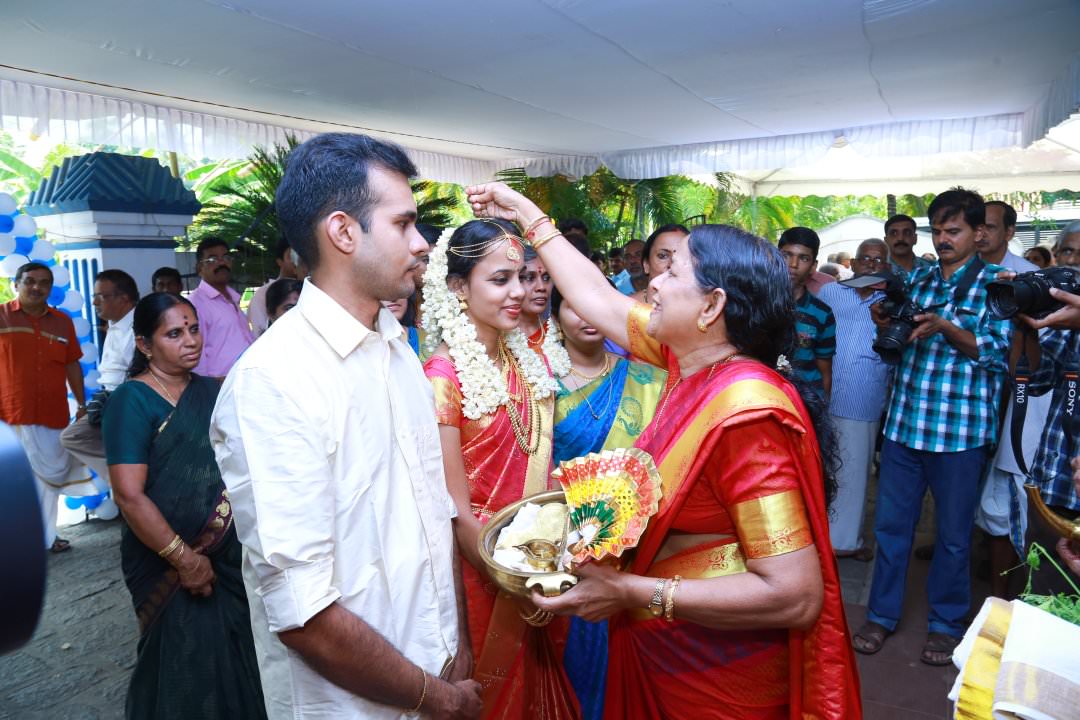 Giving a warm welcome to the newly weds, at their new home.

Once the bride and groom reaches home, bride is received by the mother in law. She will lit a traditional Indian bronze lamp to invite her home. Bride has to take the steps using the right foot, as it is considered positive and lucky to enter the home with Your right foot. So the bride keeps that tradition. Once inside both the bride and groom sits besides each other on the couch in the living room . They will be given a banana and a glass of milk . Bride has to eat half the banana and give the rest to her husband. She has to drink the milk and give the rest to her husband. This is a tradition in the Hindu families, which symbolises that the bride and groom have to share everything in their life between each other.

How long the bride and groom lives in their parental home is dependent on them. If they are both working far away from home, then they will soon say good bye to their parents and live on their own. A majority of people stay with their parents for a long time until they are financially secure to move into their own home and start a family.

Since times have changed, the traditions have also changed in India .